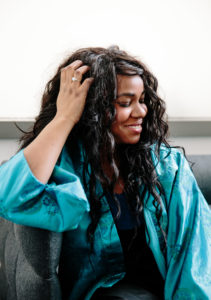 The London-based R&B star created a video for the song Orbit that her fans can personalize by entering their birth date, making the dancers’ poses match the viewer’s pseudoscience sign, and ever-changing the colours on screen.

NAO used cameras in Microsoft’s volumetrical capture studio in San Francisco to record her movements before the Azure Custom Vision Service matched the footage to constellations. Developers use the Azure tool to label images, before a machine learning algorithmic rule trains it to recognise new, similar pictures.

The video to Orbit features NAO and others dance in a zodiac-filled night sky, and the AI highlights when their bodies match the position of the stars.

“I wanted to do thing a bit different than a straight-up performance video; thing that matched the epic nature of the song,” the 31-year-old BRIT Award campaigner aforesaid. “I hope it gives viewing audience a new and absorbing way to engage with me, my music and the themes of my album. exploitation technology and choreography are some new to me so a lot of thought and hard work has gone into this video experience.”

Orbit is from NAO’s latest album Saturn and the video focuses on a Saturn return – when the planet returns to the same place in the sky that it occupied at the moment of a person’s birth.

NAO added: “I wasn’t a follower of star divination but as my friends and I hit our mid-to-late 20s the phrase ‘Saturn’s return’ unbroken cropping up in conversations, so I started looking into it. The conception really smitten a chord with me as my life pretty much turned on its head around that time and I felt like I was entering a wholly new phase of my life. The idea that Saturn is the planet of lessons, and some of those lessons are very painful, really tuned into how I was feeling at that time.”

After observation the video, fans can share an image of NAO sitting in their pseudoscience sign, on with their own Saturn’s return.