Today at the Helpdesk - ITV Player

A Customer raised a ticket at the HelpDesk today complaining that their ITV player was no longer working correctly and giving strange messages. We asked for a screenshot and received it minutes later. The screen show indicated that 'Ad Block Software detected' which peaked our attention and so we investigated further.

Now ITV Player is one of the few remaining companies still using Adobe Flash Player to stream movies despite there being much better transports available (like HTML5 etc) and flash gives us a number of problems here because (a) shockwave/flash is blocked by default at the firewall (as it is for all our customers of officeGateway), and (b) none of our workstations have flash installed as its a high security risk. Anyhow after some faffing about we managed to get the adobe flash demo page to work and then switched on over to ITV player.

After selecting a program to watch, the usual unclean and tatty flash player window is displayed, and we click the big > in the middle to play. Immediately we're given 5 minutes of adverts to watch before we can do anything else like FF/REW etc. Then after the 5 minutes of ad's we're onto the programmes introduction for another 2 minutes and then finally the show begins. Now at this point we followed the EU's reported behaviour of fast forwarding to the second segment of the show, and doing this means that again we have to watch another 5 minutes of adverts, and then on the last advert.... 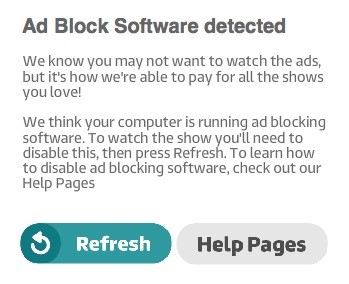 Perfect, we can reproduce the issue in a freshly installed (today) system of Safari 9.1 on OSX 11 with definitely no ad block software installed. After this rather abrupt message the player is dead and you have to refresh the page and whilst the option to 'Resume' is offered it does nothing except start from the beginning again meaning... watch another 5 minutes of adverts, FF then watch another 5 minutes of adverts and finally get to the segment you need to watch, but on our second try we got something else... 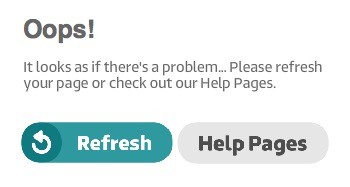 And yet again, flash player is dead and we've got to reload the page, another 5 + 5 = 10 minutes of the same pointless adverts and then the show plays just fine. We shuffle back and fourth several times after this and it seems to play everything just fine, we even left it playing in the background and it got through another two episodes before the 'Ad Block Software detected' message truncated our viewing enjoyment. So, being 'flash' which is so easily reversed we downloaded the SWF file and took a look at the cause of these spurious and erroneous messages. 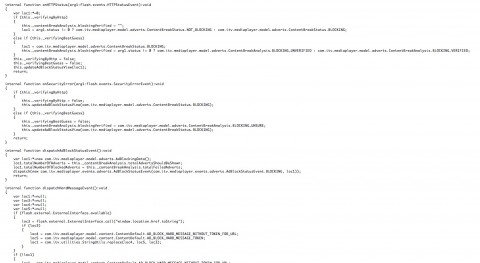 Looking at the code(scripts) within the SWF file it would appear that the ad block software message is triggered when a HTTP request fails, but that wouldn't necessarily mean its ad block software would it? In our short tests today the player has shown itself to be far less than reliable on a fresh install of OSX and if all it takes is a HTTP error to cause it all to come crashing down then someone really should sort that out. Whilst we were in the code we did notice a significant level of logging and auditing taking place that I'm fairly sure no one knows is happening but that's another story for another day.

For effective Ad Blocking with this shockingly poor flash setup it would be much easier to redirect the SWF request to a crippled SWF (or decompiled/recompiled) with the ad's removed. If, on the other hand someone actually wanted to add in 'Ad blocking' software detection then doing it within HTML5 would be far simpler with some client side js/java passing a token back to a server somewhere then a reliable solution is to be had. Of course, once you've spent a few £££ on that solution then ad block software vendors will find a way around it by trashing your client side js so one has to wonder if the battle is even worth the expense? In ITV's case I strongly suspect their spurious 'Ad Block Software detected' message simply serves as a catalyst for the viewer to hit google and discover that Ad Block software does exist and how to download and install it. I suppose its a little like "thepiratebay" that virtually no one had ever heard of until some muppet decided to sue them and then suddenly the whole world knew about it and sites like it and moreover how to get around all the worthless 'blocks' that ISP's were forced to setup by clueless judges.

So back to the ticket in question, we couldn't of course fix ITV's failures to provide a stable service but the whole idea of 'Ad Block Software' gave us another avenue to explore - Ad Block Software! We searched the internet and found several solutions all promising to remove all ad's and thought we should give them a try. I'm going to go ahead and call these Program 1, 2 and 3 and not give out the actual names of the software as I don't want to encourage anyone to install software that's not been fully certified as safe but if you have the knowledge then google/bing is your friend.

So, in summary, the message is in error and it clearly only serves to annoy potential viewers but when you look at the whole ITV player setup, being forced to watch 10 minutes of adverts, that's 40 minutes per hour is in itself going to alienate customers especially if they are just the same ad's over and over again which is what we observed. I personally think YouTube has the balance about right (and I'm rarely one to support Google) with its skippable adverts which means that if I'm not interested then I'm not forced to watch it all, but on the other hand it means that the adverts that do interest me I can watch in full and I do watch some in full just in case anyone wondered.

This article is a technical article and the content is solely the opinion of the author and not the company. E&OE. Neither the author nor the company has any interest in ITV, its player or any solution designed to remove advertising and does not recommend you do or do not install any such solution.

So, the same customer contacted us again today via the HelpDesk to tell us that ITV Player was now not working at all and instead was saying "ITV Hub is only available to viewers in the UK" as below: 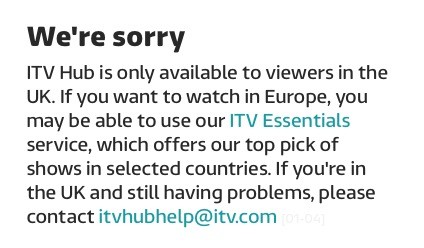 Whilst its mildly entertaining that ITV seem to think that Reading, Berkshire is not in the UK that is in fact the location of our customer. We did check the RIPE whois on the IP subnet used by our customer and it was indeed located in the UK so this is clearly just another ITV error. We simply advised that they contact itvhubhelp@itv.com as instructed because the only people who can fix this are ITV.

ITV Player has always been a substandard piece of trash. Requiring logins, requiring ad-blockers to be removed when they aren't even installed. I just logged out of the site and will make a mental note not to return for another couple of years. I don't have the patience for such incompetence.

0 Cancel Reply
ITV Player has always been a substandard piece of trash. Requiring logins, requiring ad-blockers to be removed when they aren't even installed. I just logged out of the site and will make a mental note not to return for another couple of years. I don't have the patience for such incompetence.
Cancel Update Comment